The Valle d'Aosta boasts more than 150 castles. We have looked at and photographed several in prior passages, but actually stopped at the Castello di Fenis and photographed a couple others...

From Cogne we drove back to Aosta, the capital of region, a small but nice city we have driven through or past numerous times. This time we stopped, primarily in search of a Wind store, in order to buy a SIM card for our old Wind dongle, and thus have improved communications with the outside word. This we accomplished (the buying part) before the 12:30-4PM siesta closure. We spent another several hours looking around the town, which was, of course, mostly closed. We find that we buy far less when the stores are closed. Aosta is literally at the foot of the biggest of the Alps, and thus it still surprises us to find Roman ruins in such an apparently impractical place. But the little St. Bernard pass is not too far away, and indeed the Romans were here. In force, and with all the comforts of home, as usual. 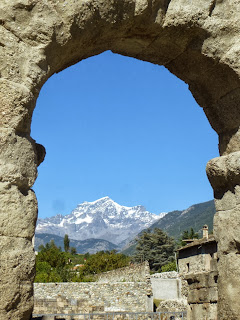 I had seen Gran Paradiso, the mountain, a couple times from the Mt. Blanc environs, and wanted to see it closer up. It is Italy's 7th highest and the highest completely within its borders. It is also the hub of a large national park, Parc Nationale Gran Paradiso, originally King Victor Emmanuel's royal hunting grounds, which he gave to the nation (Mussolini) in 1922, ostensibly to provide for the preservation of the nearly-extinct ibex. It is also Italy's first and possibly largest national park. Anyhow, its gateway is Cogne, scarcely an hour from Courmayeur. We drove over on a Sunday afternoon, quickly satisfied my curiosity about the mountain, viewed a local spectacle, stayed overnight in Cogne's large sosta (aire), and then drove the next morning to Lillez, a nearby village, to see its waterfall.

The last time we did the Mt. Blanc tunnel transit, it was Courmayeur that had the awful weather and Chamonix that was sunny and dry. Just the opposite this time. But the same in one respect: Courmayeur too is shutting down. Already no bus service up to the Val Veny where we'd planned to do some hiking. Rifugio Elisabeta closes this weekend. None of the lifts is working. Well, the Funivia is, but it's not for hiking. Bus service up the Val Ferret only goes as far as Planpincieux. There are still a number of tourists around, but they are all indies, quite a few on foot doing the TMB or some stretch of it. On a hike up to Rifugio Bertone we met a couple from Alaska doing the TMB who had already had a few surprises about diminished or closed facilities. No other camping-cars at all in Courmayeur.