Ever since we began this blog in 2008, I have been waiting for some pretext to post about our former Montana home. It was not designed by Frank Lloyd Wright and could not be described as "organic," but it did have a significant water feature, added c. 2003, described below. Water indeed fell.

We bought the house, a 1994 Rocky Mountain Log Homes design, built by a forest service threesome on spec--the flooring and cabinetry and doors all from ponderosas on the five acre property--in 1997. It was our Montana dream home, on Horseback Ridge of Black Mountain, overlooking Missoula Valley and facing the Mission Mountains. We proceeded to decorate it with every item of Montaniana we could acquire. Within the first couple years we decided further changes were in order and proceeded to remodel the principal (formerly "master") suite, much enlarging the bath, installing a jacuzzi, a see-through fireplace, and a door to the outside deck's hot tub. Among earlier additions were the deck itself, two giant windows to let more sun into the great room, a "character log" that was its central post, more built-in furniture, and so on. It was after the big remodel that we decided we wanted a water feature.

Unfortunately, the closest water was our 477 foot deep well. No creek nor stream to divert. We wanted a waterfall and a pond large enough for fish. As we researched matters, it became clear we would need a second, upper, filtration pond ("Hidden Lake"), a short watercourse ("Horseback Creek") leading to the waterfall ("Broken Finger Falls") and the pond itself ("Blue Pine Lake"), which needed to be at least three feet deep to allow the fish to survive the winter. It took us two seasons to do all this. Digging down into the layered sedimentary rock on our hillside was aided by use of a rental jackhammer. The big rocks came via truck, forklift, and come-along; the smaller ones gathered mostly from the North Fork of the Clearwater, just over the hills in Idaho, and hauled back in our trailer. And I finally found a better use (than fishing) for my waders and boots. But by 2003 it was finished, and we were to enjoy our falling water the next several years. Among the additional features the Kaufmanns didn't have at Fallingwater was a timer on the recirculating watercourse/filtration pump (and thus the waterfall) and a motion detector-operated sprinkler to keep animals away from the lower pond (and fish) and the raspberry patch adjacent to it. We made many other improvements to the house and property in subsequent years, but the waterfall and pond were perhaps the most memorable.

Fallingwater has long been high on our list of American architectural sites to visit, not least because of its fame but also because of our liking for the effective integration of the natural and the built. Frank Lloyd Wright designed the house in 1935, a summer get-away, for the Kaufmann family, owners of Pittsburgh's largest department store (remember those?). FLW over his long career designed hundreds of structures, many of them individual homes, and they are all over the globe. But Fallingwater is relatively unique: not only does it most superbly express his "organic" philosophy of integrating the natural and the built, but it is also the only instance where the interiors, furniture, etc., that he designed for the house remain and are on view in their intended setting. Alas, 2020 was not the best year to visit Fallingwater. Because of the plague, only outside tours and viewing were permitted. But one could look in through the windows and get a sense of the thing. And the outside, over-all view, especially in this year's extraordinary fall color, is certainly the best for appreciating the house in its setting. Although located in Mill Run, PA, it is anything but run of the mill. Much of Vicki's childhood was spent in western Pennsylvania. 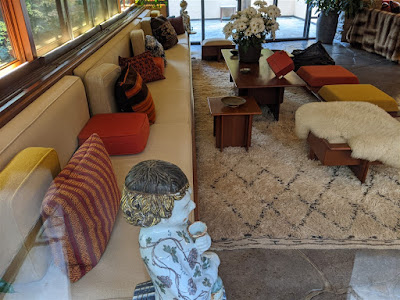 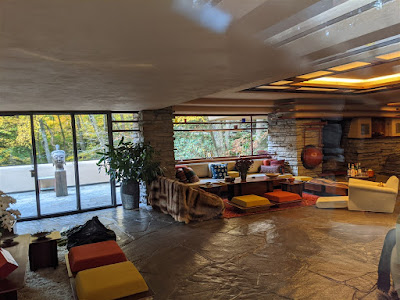 No tour of the UP is complete without a visit to Mackinac Island, formerly a fort and fur trade center, and, from the 19th century on, a resort of some note. Its main distinguishing feature, apart from the fudge factories, is its lack of trucks and autos, which were banned some time in the late Holocene Epoch. (Bicycles, not much older than cars, are permitted; as are (!) snowmobiles.) We overnighted in one of the ferry parking lots in St. Ignace and then embarked early the next morning for the voyage out to the island.