Back on the coast, just west of a place called Pulpi, we happened onto a free-camping paradise, low hills right on the sea, dozens of RVs, all enjoying the same view. We plan on staying here a couple days, doing nothing but walking into town, 3 miles away, for wifi. At a bar. Life is good.

Oh, Pulpi is famous, by the way. According to the all-knowing and self-correcting Wikipedia, "On September 29, 2007, Pulpi tossed the world's largest salad, with 6,700 kilograms (14,740 pounds) of lettuce, tomato, onion, pepper and olives, supervised by 5000 cooks over 3 hours. A Guinness World Records judge was present to confirm the new record. The salad was prepared in a container 18m (59ft) long and 4.8m (15.7ft) wide." Too many cooks may spoil a soup, but, apparently, not a salad.

Other Side of the Mountains


The east side of the Sierra we drove through is a landscape very reminiscent of the American southwest. In fact, we read, it is used very often for Spaghetti Westerns filmed in Europe (Sangria Westerns? Paella Westerns?).
Posted by Mark at 1:44 PM No comments:

We have crossed the California Sierra Nevada mountain range many times, even climbed Mt. Whitney way back in 1972. They are much higher, larger, more rugged than their namesake, The Sierra Nevada here in Spain. In winter especially, the Sierra Nevada are an impressive brilliant white backdrop for Granada, and seeing them we decided to risk crossing them en route back to the coast near Almeria. It was a gorgeous drive, superb highway, not all that much snow really, and none on the road. The terrain east of the mountains was equally interesting.

If El Greco had been a flamenco dancer, he would have held the castanet like this: 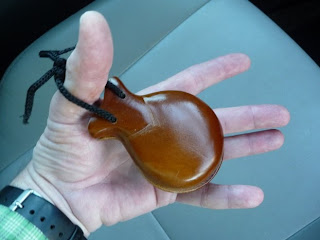 
The Alhambra is actually three or four sites, the Palacios Nazaries, the Generalife gardens, Charles V's palace, and the old fortress, the Alcazaba. The Palicios Nazaries is the main thing, the last palace of the retreating Moors, built in the 13th and 14th centuries, handed over to Ferdinand and Isabella in 1492. (Ferdie and Izzie were really multi-tasking that year). We spent the better part of the day seeing all this, reputedly the top site in all Spain.

They say what you get from something depends a lot on what you bring to it. I confess I do not bring a great deal of knowledge about Muslim art or religion to these sites. Rarely do they do anything but geometrical forms and calligraphy of lines from the Koran. Particularly in religious settings, there can be no copies (graven images) of nature, people, etc. Not even half way through the Nazaries, I felt myself actually yearning for a St. Sebastian, an Annunciation, a Chinese landscape, even a Picasso. How long can you stare, with interest, at a kaleidoscope?

Maybe it was the season, the lack of novelty, or something else, but I was less impressed with the Alhambra than with the Alcozaba in Seville or, especially, the Mezquita in Cordoba (apples and oranges, yes, I know). The audio-guide, with its deadening, I mean, soothing, music and voices, saturated with Washington Irving (ick!) style romance/fantasy of the Alhambra did not help. When Irving found the Alhambra in the 1820s or 1830s, it was a fair ruin. The job of rebuilding it, deliberately, as a national monument/tourist destination must be as interesting a story as anything Boabdil or Ferdinand or Isabella did here. But that story's not much told. And for the rest, you are asked to use your imagination as to what things looked like, who was there, what was going on, etc.  Personally, I have very weak imaginative powers when it comes to sultans and sultanas, ambassadors and emissaries, et al., although I do a little better with harems.
Posted by Mark at 9:50 AM 1 comment: