We've been riding up this little mountain west of West Yellowstone since 2003. Usually later in the season. Sunday's visit was the best ever. Extreme winter wonderland. A fitting end to our winter travels of 2016. 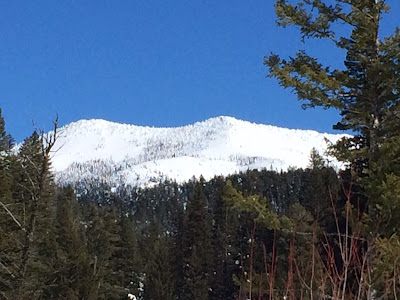 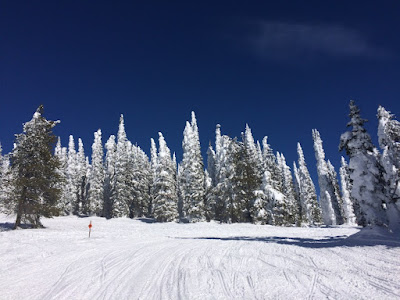 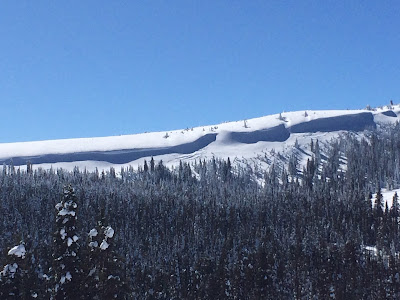 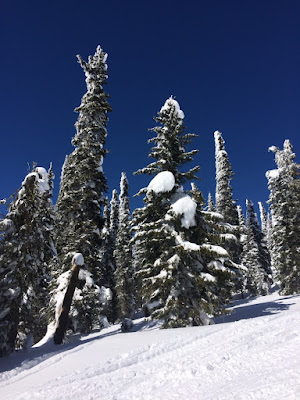 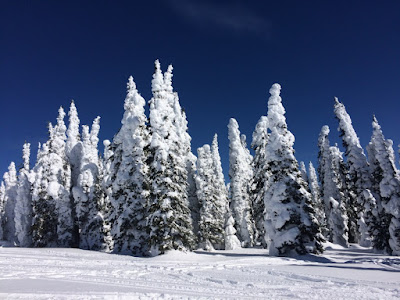 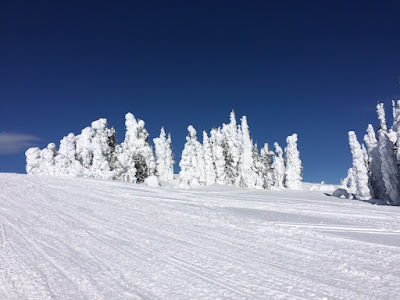 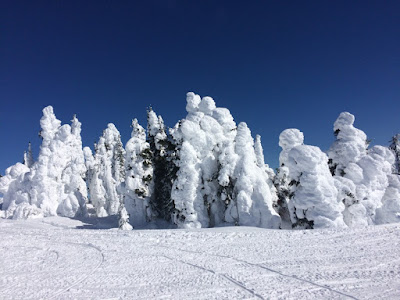 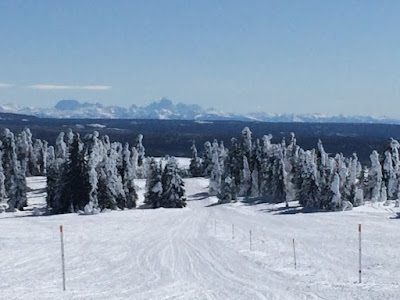 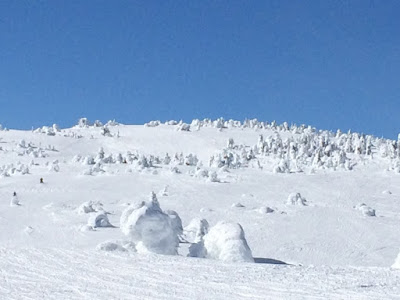 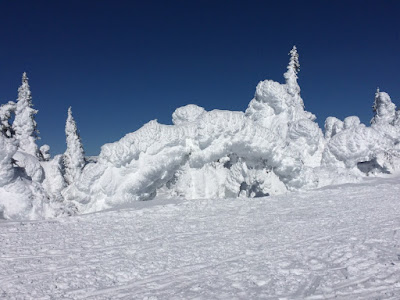 We got to Island Park, ID, Saturday afternoon, and camped in a large snowmobile parking lot across route 20 from the USFS ranger station, just south of the Buffalo River, near Pond's Lodge. (All this for future reference.) (Island Park and West Yellowstone are neighbors in a vast recreational wilderness complex west of Yellowstone NP; snowmobile paradise; also hiking and fishing paradise.) Next day we did a ride from Island Park to Big Spring, then the Black Canyon Loop, and then up old favorite Two Top. Two Top was the best we've ever seen it and warrants its own post. Next day we moved to our old parking lot in West Yellowstone and did the ride out to Lake Hebgen, the FS look-out there, and back to town. More old favorites. And on Wednesday we did a huge circuit, Lion's Head, Valley View, Two Top once more, Black Canyon, then the long ride along the Yellowstone border back to West. We've done all our favorites.

We stayed a few days in Dubois, waiting for the cold and very high winds to subside, and then drove back up Togwotee Pass to the Four Mile parking lot, west of the pass, and near the Togwotee Mountain Lodge, for another day or two or three's sledding in one of our favorite places.

Weather forecasts suggested that the full force of the El Nino was approaching--warmer and drier weather in the northern Rockies--and that we had better do our favorite rides sooner that later. Thus we drove the hundred miles or so from Alpine north through Jackson and east to Togwotee Pass, in the heart of the great Continental Divide Trail system, and eventually to the Warm Springs parking lot we frequented last year, near the Line Shack. There appeared to be several feet of snow all around, except for the southern exposures, and the grooming was great, as usual. So at the first opportunity, with blue skies and temps in the 30s, we headed off onto our all-time favorite ride, the fifty or so miles to the Green River Lakes campground and the view of Square Top and its neighbors towering over the lakes. The route takes you past a national elk refuge, and on the way back we were treated to the feeding of the elks. (See YouTube videos noted below). The next day, Saturday, we did a seventy mile ride in the middle part of the CDT system, but by then the weather was beginning to deteriorate, warmer but ferociously windy, and we decided it was time to get off the mountain and down to Dubois, our refuge at just about this same time last year. Apologies for duplicates of pix I took last year in http://roadeveron.blogspot.com/2015/02/snowmobiling-continental-divide-trail-5.html and others.

At length we departed Missoula, over-nighting in the Bozone, and enjoying the Broncos' very satisfying Super Bowl win over the Panthers. I am no fan of passball, as American professional football has become. My favorite team, historically, threw six passes in its third consecutive Super Bowl appearance, completing five, and still routing its NFC opponent, the hapless Vikings. So I particularly enjoyed seeing Sunday's Hall of Fame and MVP quarterbacks both harassed, hit, sacked, stripped, and intercepted, throughout the game. And the right team won. The Broncos' defense certainly rivals the nearly-undefeated 1986 Bears. But I digress.

From Bozeman we drove on to West Yellowstone, cold and snowy, but covered in dense fog that was supposed to last three more days. Island Park, across the border, was no better, so we decided to keep on driving (hard to appreciate the scenery in a mountain fog), all the way to Alpine, WY, and its great Greys River trails. We camped three nights in the giant snowmobile parking lot there and got out for two 100+ mile days on some of our favorite rides.