We were feeling pretty confident about our plans for shipping our Roadtrek Agile to Europe in May and enjoying it there for the summer; and beyond. So confident, we decided to go ahead and make arrangements for shipping, insurance, etc. Then we learned that the major underwriter of insurance for American RVs there had suddenly dropped out of the market; and the best substitute we could find was a completely-out-of-the-question $300 per week for comprehensive. We were not willing to keep the Roadtrek over there with liability insurance only--it's too nice--and have reluctantly decided to sell it. You can find it on RV Trader or Craigslist/San Francisco. Or read the narrative and view the pix below...

"2008 Roadtrek SS Agile. This Agile is on the Freightliner Sprinter 144 inch van chassis with the new body style available first in 2008. Gorgeous silver paint with dark gray contrast. The Sprinter has a Mercedes Benz V6 diesel engine that gets 18 to 22 mpg. Exterior length of 19ft. 6in. is easy to maneuver anywhere  and parks in any standard parking space! Drives small but lives large. This Roadtrek seats five and sleeps two on the power adjustable sofa that makes into a king size bed. The entertainment center has a 19" flat screen TV, viewable from swiveling front seats or sofa, and a DVD player complemented by a surround sound system. The galley has granite counter top,  cherry cabinets, two burner glass-topped, recessed stove, stainless sink, convection microwave, 12 cup coffee maker (no carafe), and 3-way fridge with freezer compartment (uses battery, gas, or shore power). Thermostat controlled propane furnace and optional 11,000 BTU roof top air conditioner with heat strip saves on propane when on shore power. The bathroom is equipped with toilet, sink and permanent shower. The Onan generator with only 27 hours lets you dry camp in National Forests and Parks or even Walmart! Nice exterior awning and shower for camp-outs! Extremely well maintained with oil changes every 6,000 miles (MB recommends 10,000). Next oil change not due for 9,000 miles! Newer AT tires on rear have only 8,000 miles. Brakes still at 2/3. Coach batteries 1 year old. Agiles are rare because they do everything well. Selling for $59,500 --$1,700 below book value and this is no average condition vehicle. 650-862-4055."

It would have been our dream motorhome over there... 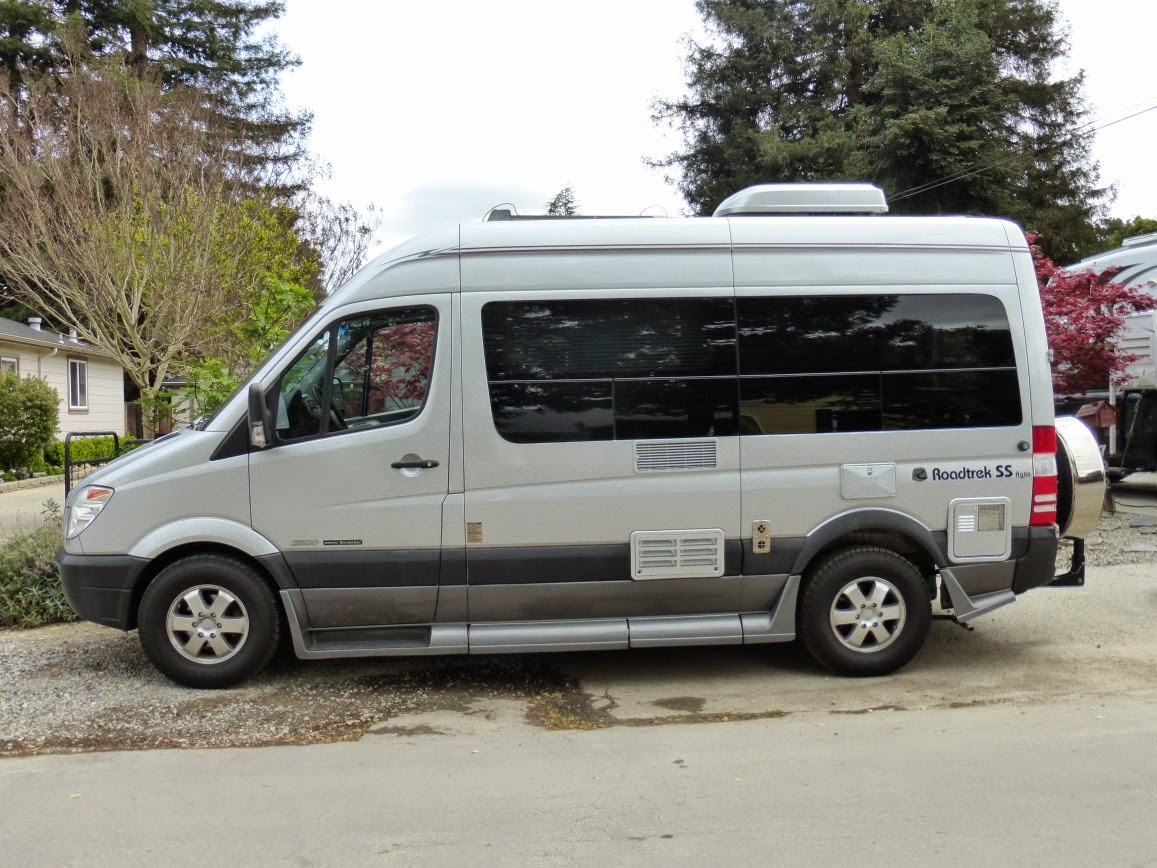 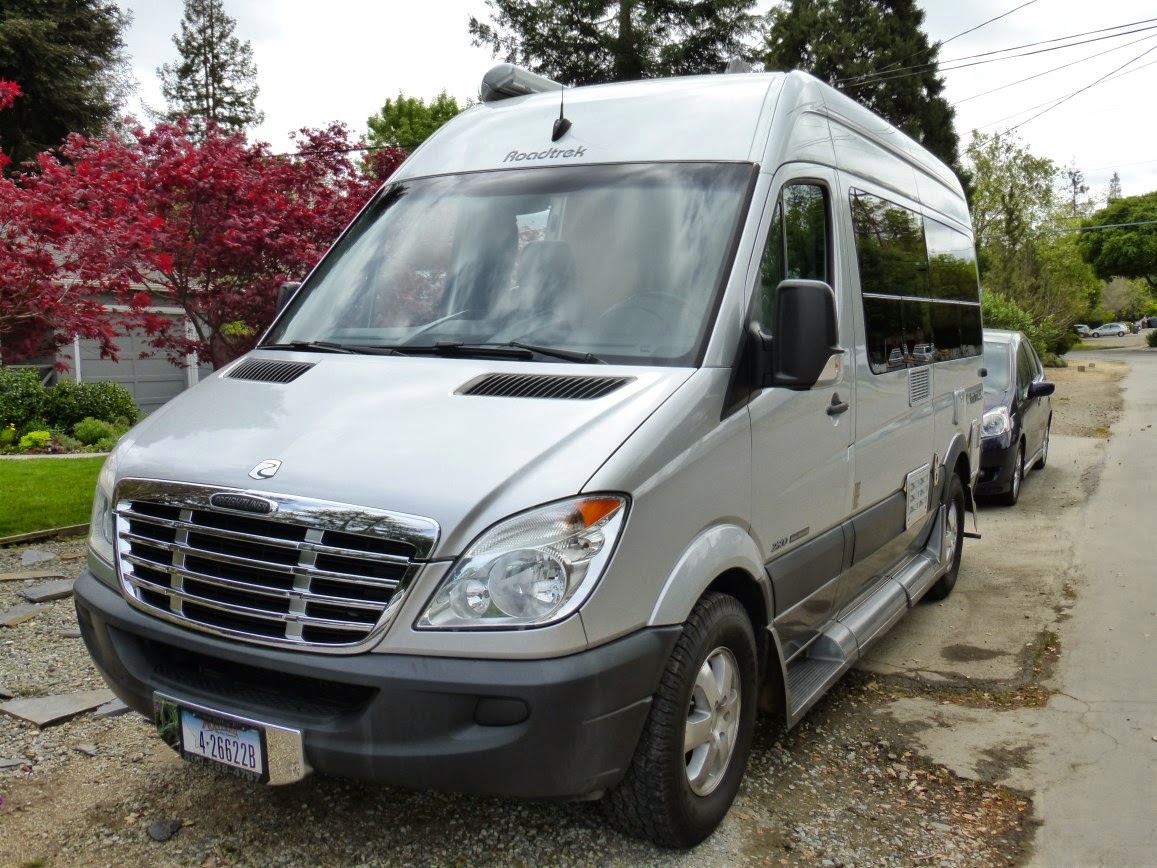 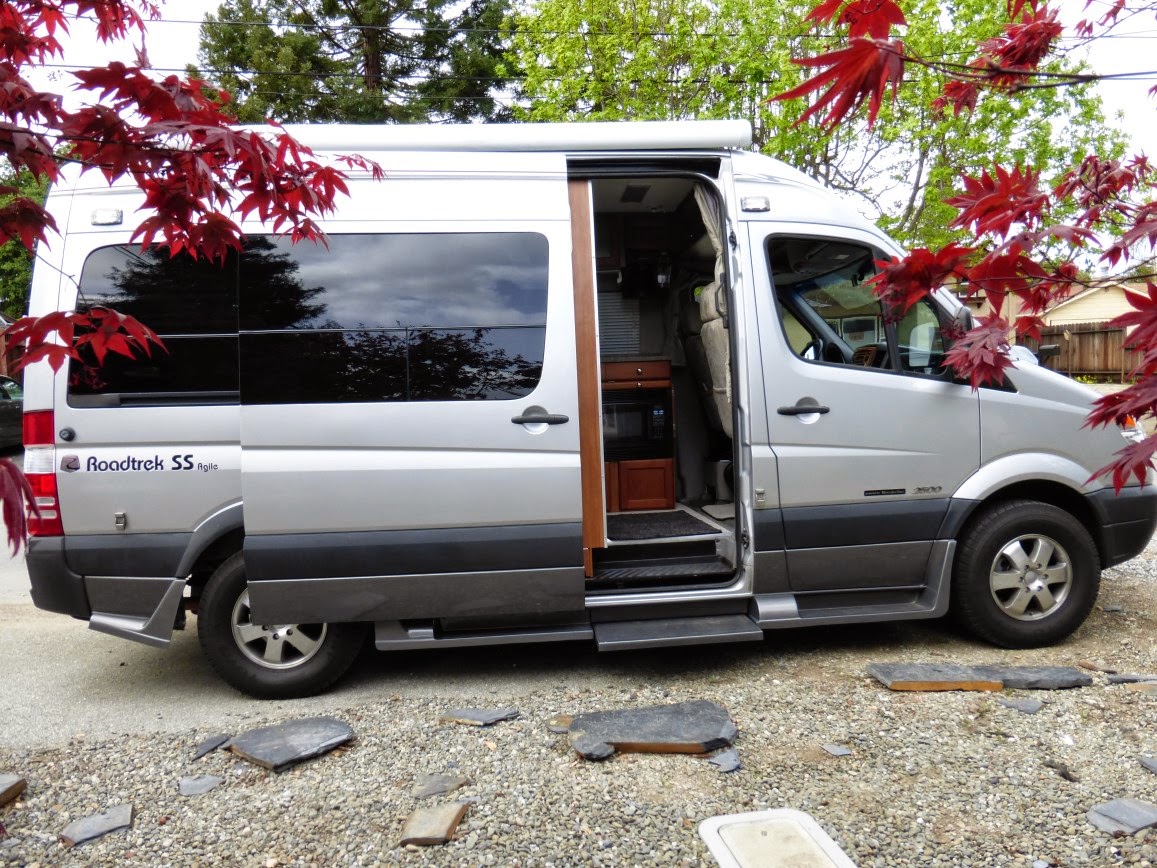 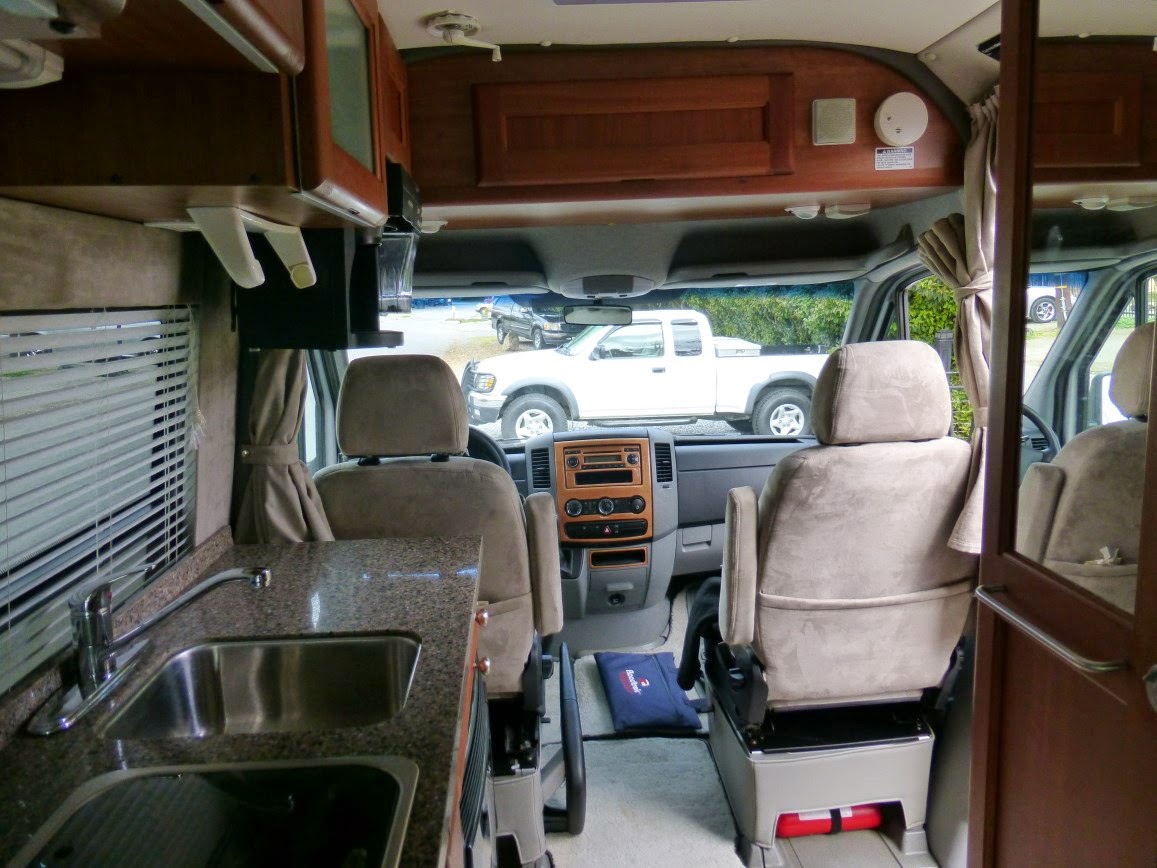 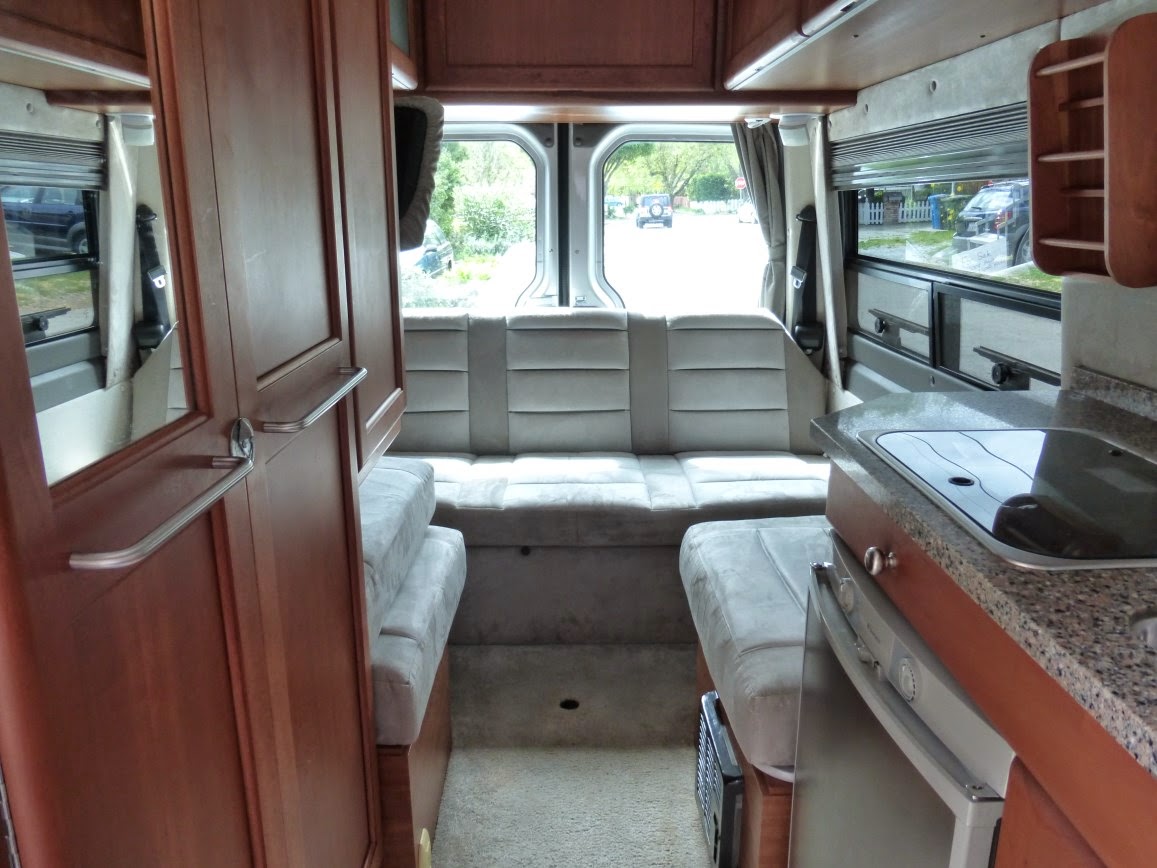 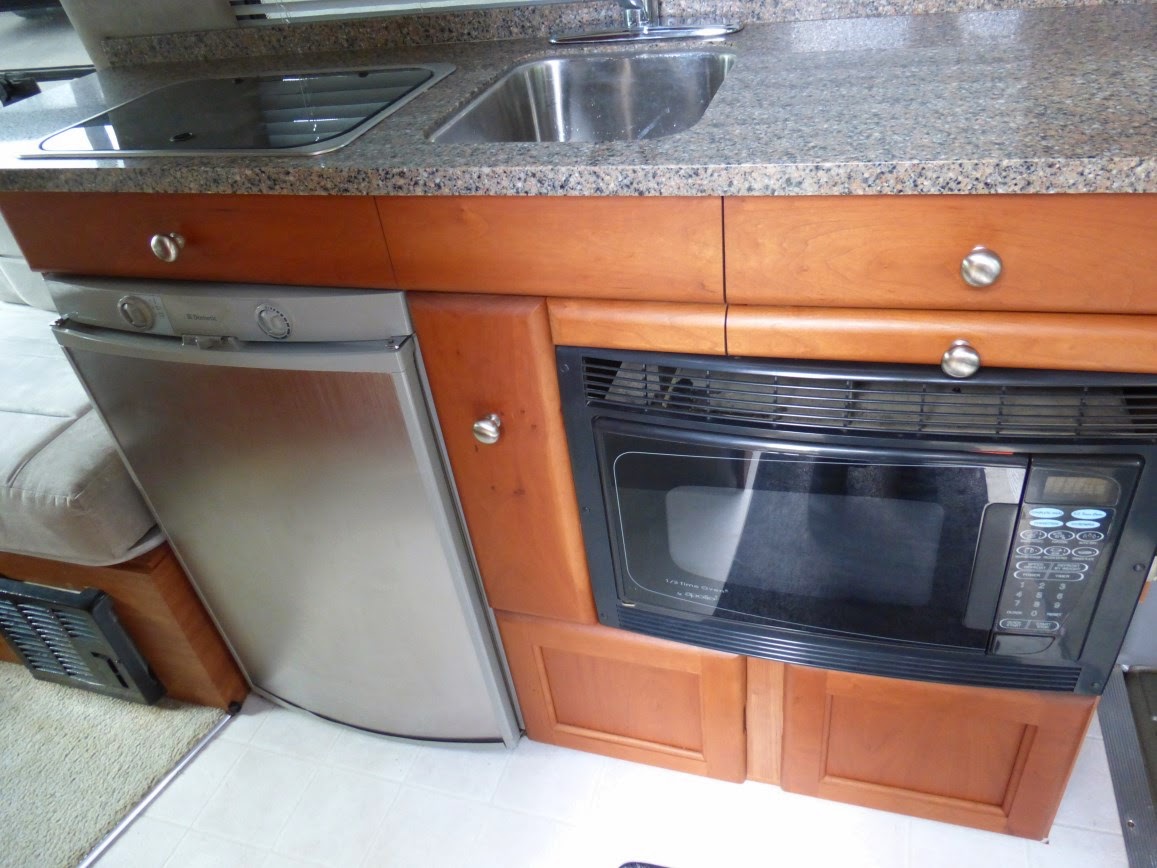 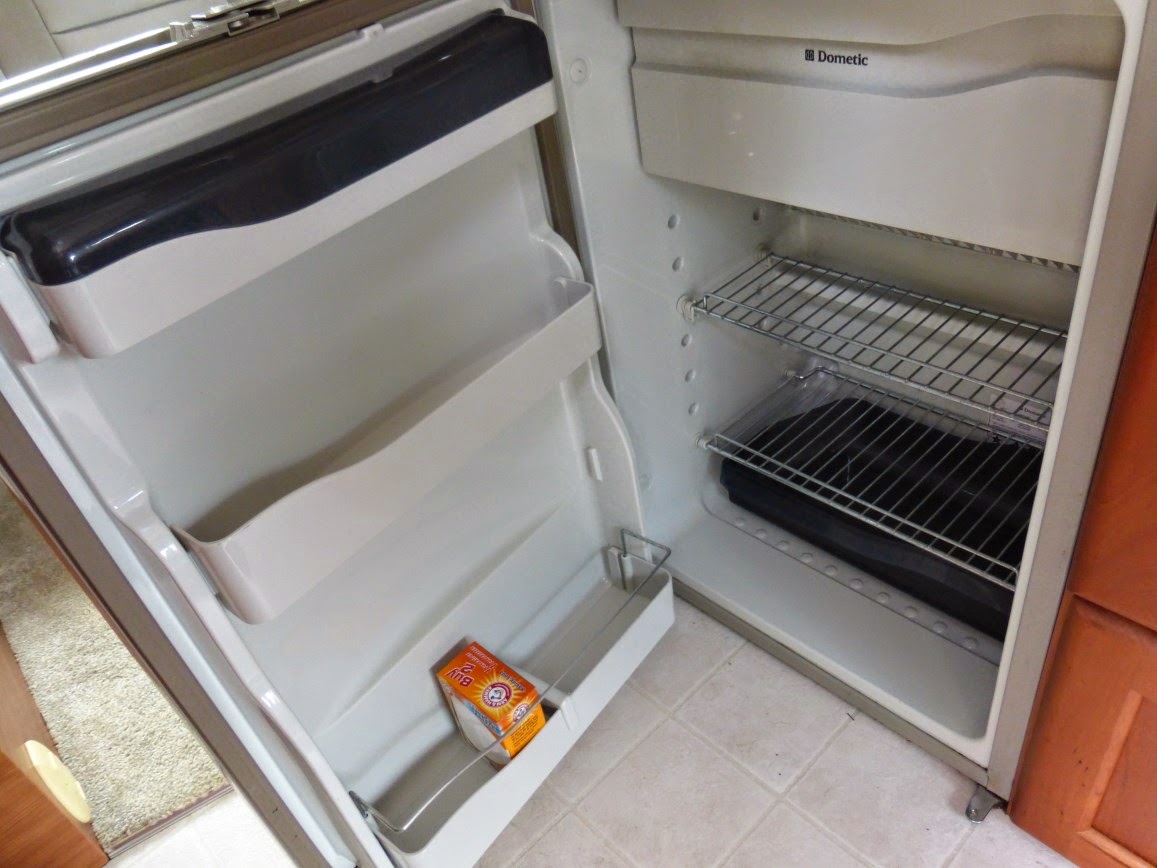 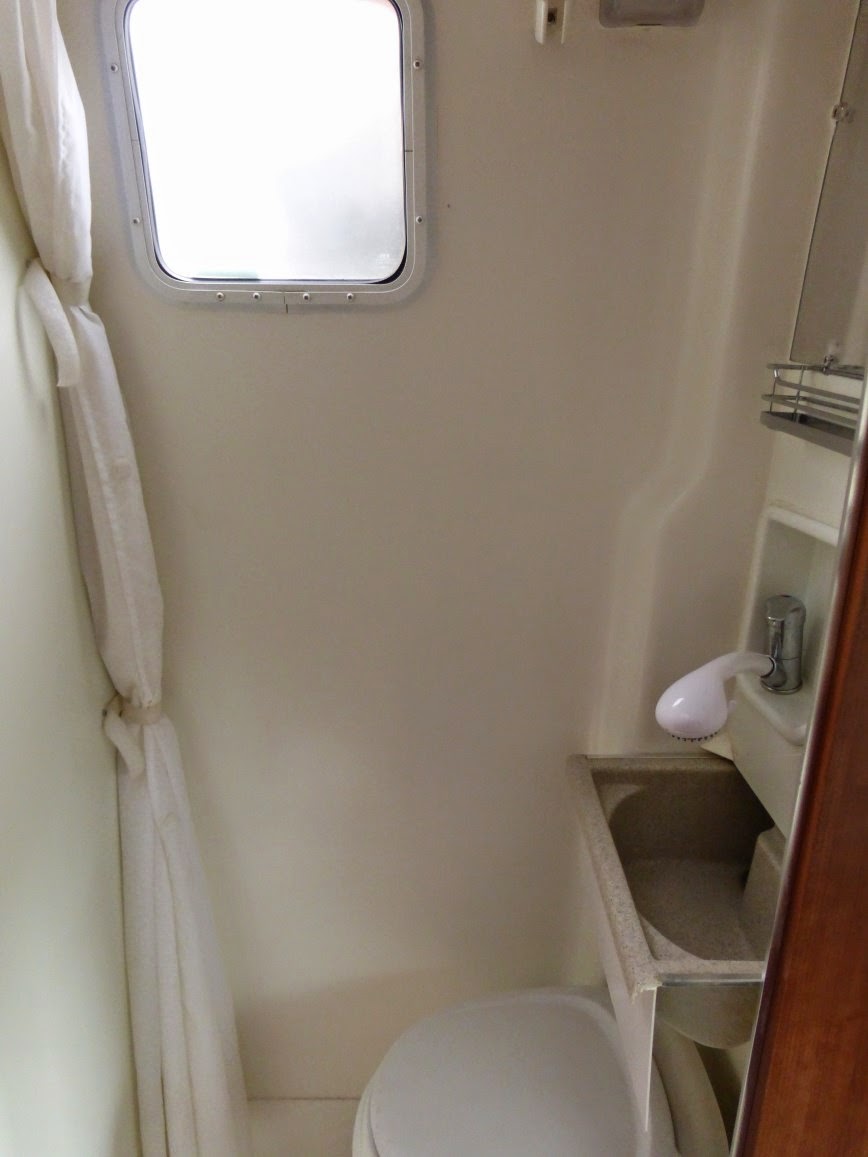 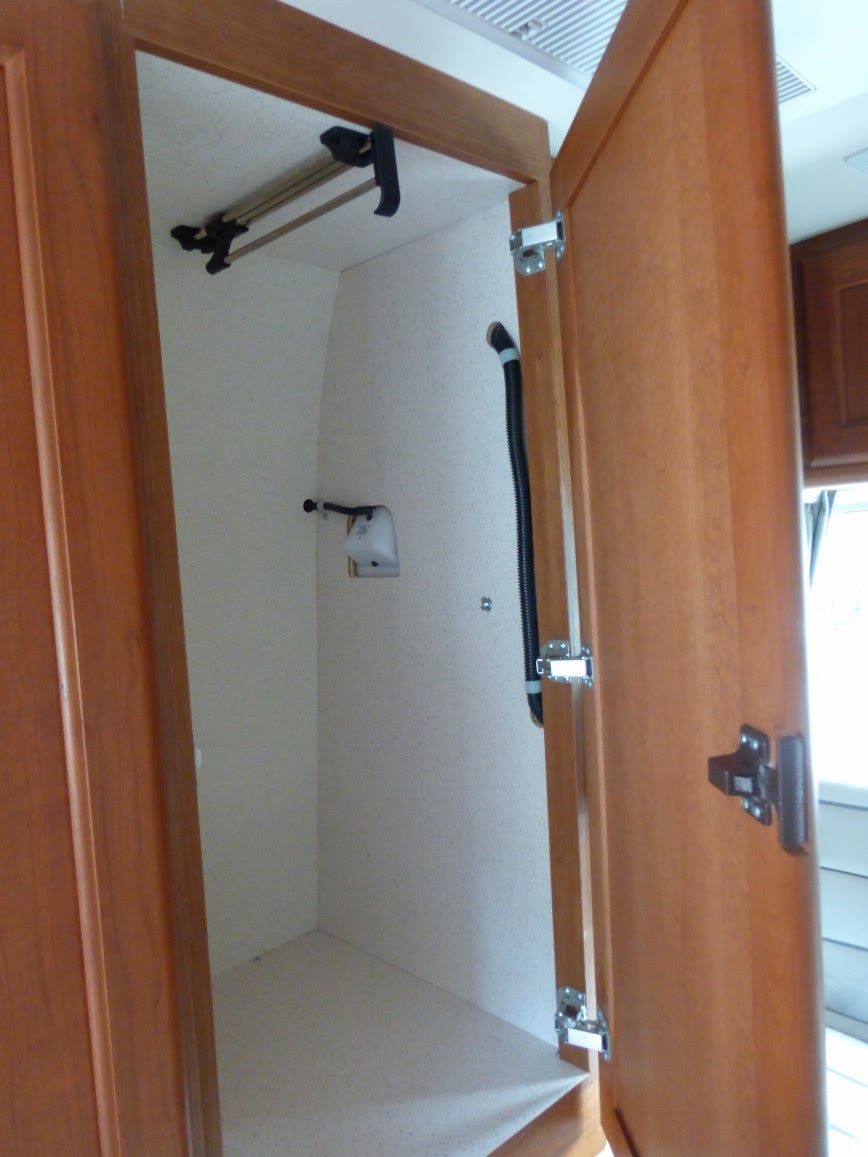 After getting back to Menlo Park, we took P camping for a weekend...

We spent another week or so in Missoula, seeing friends, enjoying the relatively decent weather, working at our storage unit, and having some further work done on the Bigfoot. We left March 12th, heading back to Menlo Park, but this time via US12 and 95, through the beautiful Salmon and Snake rivers country, and then I-80, through the unrelentingly dull yet boring wastes of Nevada.

En route to Missoula Friday we thought we would give the trails near Seeley Lake a try. After nearly two hours of bronco-bust riding, we gave up. The place appears so crowded the groomer can't keep up with what little snow there is. Roughest riding ever. Fortunately, our good and great rides this winter far outweigh the bad ones.

We returned the snowmobile to our storage unit and the trailer to friend Dave on Saturday. Season over. Despite the lack of much good snow, it was a good return season for us, and we are already looking forward to 2016. It will be much easier to get things going next year, after only a year's absence and storage.

We will stay in Missoula another week or more, getting some improvement work done on the Bigfoot and more sorting/selling/donating from our storage unit. There probably won't be much news. In view of this, I offer below a brief article on the derivation of the term "Big Sky Country," (not Guthrie's novel, The Big Sky) from The Hellroarin' Encyclopaedia of Montana History and Culture, which I had the honor of founding and editing some years ago. The discovery of the term's origin was made by historian and friend Lyndel Meikle.


Schlobigsky, Vladislav Polish priest and explorer, b. 1751, Warsawa, d. circa 1810. Little is known of Schlobigsky’s early years, except that he became a black robe priest of the Russian Orthodox Church in his early twenties. Difficulties with church authorities sent him further and further east until he appeared as priest to the settlement at Russian River, in what is now California, in the 1790s. Expelled from his position there, amid rumors of improper advances toward seal-skin traders and altar boys, he journeyed further east to befriend and minister to a variety of Native Nations in what is now Montana. Little is known of his interactions with these peoples, except that he was very likely the first European to set foot in Montana. (For discussion of whether or not Poland, or for that matter, Russia, is part of Europe, see Norman Davies, Europe: A History, pp. 1-847.) Blackfoot interpreters, unable to pronounce the Polish “Schlo-”, shortened his name to “Bigsky,” whence Montana became known among later explorers as “Bigsky country.”