Thanksgiving In The Big Thicket

We've had some memorable Thanksgivings, traveling, and this one, in the so-called Big Thicket of east Texas--the Thick Bigot, we used to say in Dallas--will likely rank among them. We're holed up at the Escapees Rainbow's End "campground" near Livingston ("I presume"). It's a normal campground, a large one, plus many more acres of more permanent RV emplacements, ranging from houses with RV garages to more modest covered parking pads with utilities and storage. We have been Escapees members for a decade or so, but this, and our stay last week at the Rainbow Plantation in Alabama, are our first experiences with their properties, which are located in a number of states. The organization provides a variety of services for RVers, including even a Care Center here for invalids, persons recovering from operations, persons with disabilities, etc. Anyhow, we spent Thanksgiving at Rainbow's End for 2020, Vicki fixing a traditional dinner, and then Zooming with Rachel and Will and Rebecca and Penelope. Wet and stormy weather will keep us here through Saturday. 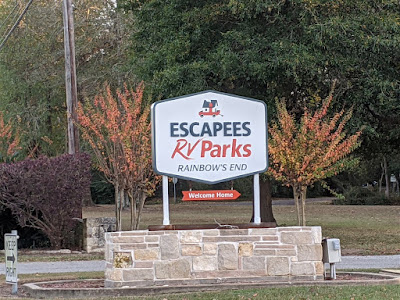 Reflecting on some of our more interesting Thanksgivings in the past has led me to compile, for your viewing pleasure, a selection of Thanksgiving blog posts 2008-2019 (with a couple lapses): 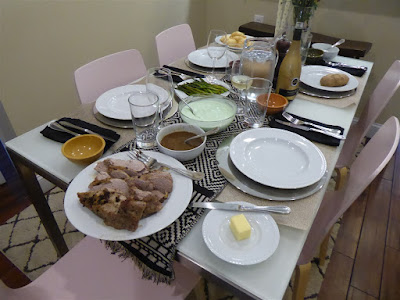 Will have to look for 2012 pix! Penelope and I enjoyed reading all of the Menlo Park entries from years past (and looking at the photos of me, she adds). :)