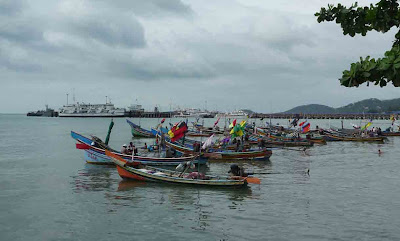 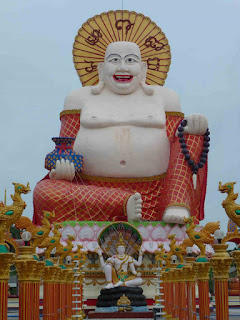 Happy Thanksgiving to friends and family. Vicki and I remain on the island of Koh Samui in the Gulf of Thailand. Somehow we managed to schedule a cooking class for Thanksgiving, so our Thanksgiving dinner, which I cooked (Vicki joined as a guest), consisted of Panang Curry with Chicken, Steam Fish (red snapper) with Ginger/Soy Sauce, and Stirred Flat Noodles with Pork. All very, very zesty and good (if I say so myself). And lots and lots of steamed rice and stir-fried vegetables, some in fact new to us. The class was at the Samui Institute for Thai Culinary Arts, www.sitca.net.

The weather has gotten decent, and yesterday we did a tour of the island, hiring a taxi for the afternoon It's only 50-some kilometers in circumference, but is wonderfully scenic and interesting, especially if you like palm trees, mountains, alternating shorelines of rocks, cliffs, and white sand beaches. Also lots of shrines and temples (at least they're Buddhist). Only the northeast shore is heavily developed. The west and north are still pretty much Thai, despite a variety of dubious tourist attractions. We did not do the crocodile farm, the elephant ride, the jeep safari, the monkey jungle, the snake farm.... Today, in addition to the afternoon cooking class, we took another long beach walk. Avoiding sun-burn has again become a concern.

Most of our attention has been focused the last two days on the escalating political situation in Thailand, particularly in Bangkok. Protesters have closed Bangkok's two commercial airports, essentially isolating the country and strangling its economy. Scores of thousands of travelers are stranded. The prime minister has declared a state of emergency, but it's unclear either the police or military will respond. An update with some background information is at http://www.nytimes.com/2008/11/28/world/asia/28thai.html?_r=1&ref=asia. (Thanks, Mel).

This morning we explored some options for getting out of the country, to Siem Reap in Cambodia, which would have been our next stop after Bangkok, or to other places. Not much is going from nor coming to Koh Samui (most planes are on the ground in Bangkok), everything's booked anyway, and getting worse as everyone tries to get out. So we are simply holding up here, waiting for the situation in Bangkok to clarify. We have reservations for Bangkok Sunday afternoon. We'll see what happens. We don't feel at all threatened. The Thai are wonderful people. We don't have to be anywhere really until December 11. We can keep our room indefinitely, internet's free, the weather's improving, the food's great, and Koh Samui's actually a pretty nice place to spend a coup. The only US TV news we're getting is Fox, and that has been a bit of a culture shock. Fortunately, there's BBC too.

The political situation and its economic consequences are really going to hurt people in this little nation. The news from India is ever more dire and distressing. Thanksgiving's a good time to count one's blessings, and Vicki and I, and ours, and readers of this blog are very fortunate indeed.
Posted by Mark at 5:28 AM

Happy Thanksgiving! We are in Chicago with Cara. Cooked a turkey with all the trimmings yesterday. We have been building shelves today and want to hang some pictures later.
Good luck with getting out of Thailand. We have been watching the news and are glad that you are out of India.