So on November 10th, Vicki and I, our hosts, Norm and Marie, and their daughter, Stacey, set forth on the drive via the Foothills Parkway to Look Rock. The Foothills Parkway is part of the Great Smoky Mountains National Park: a beautiful scenic drive in the foothills, now just past the fall foliage peak, but impressive nonetheless, not least in that it is rarely as crowded as other highways in the Park. Look Rock is a knob (elevation 2,650) on Chilhowie Mountain, with nearly 360-degree views of the surrounding mountains and valley. From the parking lot there is a paved trail to the summit. Signs say it is 1/2 mile round-trip. We five-some hiked up, had a pique-nique lunch, looked around, took pix, and then drove back to Knoxville. A fine outing. 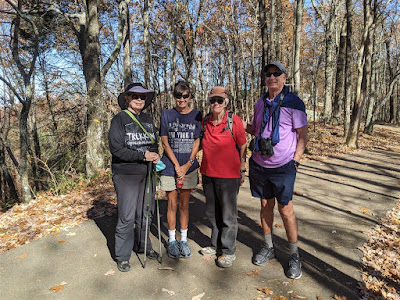 Summit ascent team
Posted by Mark at 5:52 AM